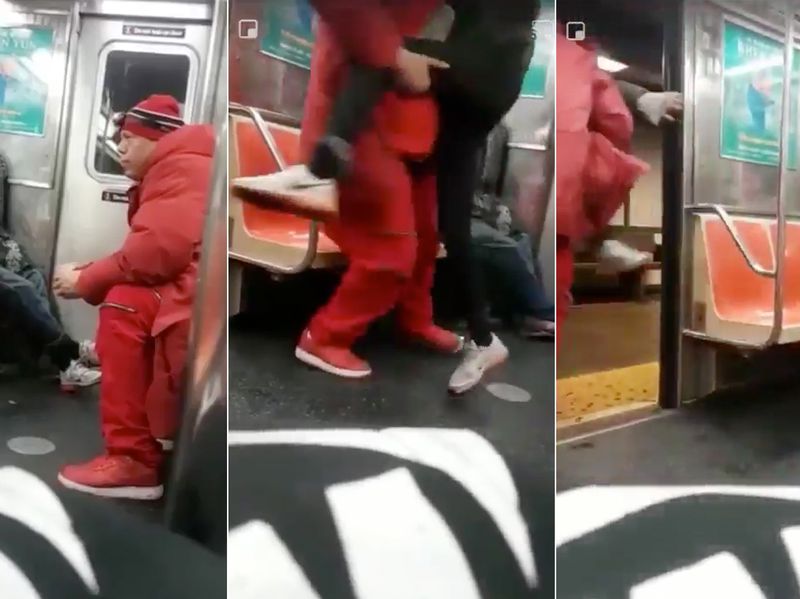 After a tumultuous day in which he was purportedly caught abducting a small crying child from a Bronx subway train—and then pummeled hours later on a Bronx sidewalk by vigilantes who saw the viral footage, officials said, an insane guy dressed in Santa Claus red was detained—and then let free.

Police discovered Sonny Alloway, 48, inside a Bronx deli where he took safety from a savage street assault by irate assailants who kicked and pummeled the outnumbered man while one of the team photographed the flurry of fists and feet. Alloway is accused of sexually abusing the girl, who is said to be young, 13 hours earlier on the train by one of the people who did it.

According to a law enforcement source, the subway suspect was detained for illegal confinement and admitted to the terrifying prank targeting the young lady onboard the train. However, the Bronx District Attorney postponed prosecution to allow police more time to investigate the odd case – and attempt to locate the victim, according to sources.

The subway video caught Alloway pulling an unsuspecting young woman from her seat aboard a No. 6 train inside the Morrison Ave.-Soundview/Westchester Ave. station about 2:30 a.m. Monday, cops said.

“No! What the f—? Let me go!” the woman howls as Alloway deposits her on a platform bench. “What are you doing? Let me go!”

She quickly worms out of his grasp, runs back onto the train and awakens her companion. She appeared unhurt and Alloway escaped — only to encounter more trouble hours later at the hands of an angry Bronx crew at Rosedale and Randall Aves. Local residents, after eyeing the video online, quickly connected Alloway with the bizarre subway incident, police said.

Guy Attempts To Kidnap Young Girl On The Train In The Bronx. pic.twitter.com/CMXdGffaWc

“First I lost my mom, now my pops is dead to me,” his embarrassed son Sonny Jr. posted on Facebook. “I’m so ashamed, embarrassed & mortified for the young lady that has had to experience this.”

A cellphone video taken by a fellow straphanger shows Alloway trying to chat up the young woman as she sat alongside her sleeping companion.

When the train doors open, he scoops the woman up and carries her off the train to a bench on the platform. She quickly escapes, with her stunned companion and other witnesses threatening Alloway, the video shows.

“If I had my gun I would have f—ing killed you, n—-!” one man screamed as Alloway stood up and walked off.

The Bronx is FAST! pic.twitter.com/1Gn3QK9ZZd

Alloway avoided arrest by police and attack by other straphangers, but his luck ran out quickly. Alloway is shown in a second video, shot hours after the kidnapping, wearing a new jacket and getting a dose of street justice.

“Do you enjoy rapping little girls?” During a brutal assault, one guy can be heard screaming. “You filthy rapist!”

At least three assailants repeat the claim in Alloway’s face as they kick, punch, and spit in his face until he tries to walk away and seek refuge inside a neighboring deli. Cops swiftly apprehended him and charged him in connection with the prior subway footage.

“Force was used, but he’s a big guy, like 6-feet,” said the law enforcement source. “Things got heated, and there was a fight.”

He was taken to St. Barnabas Hospital with minor bumps and bruises, officials said.